FOUNDER OF THE ARVIGO (R) TECHNIQUES OF MAYA ABDOMINAL THERAPY 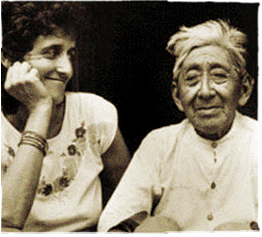 In 1983, Chicago native Rosita Arvigo, a doctor of Naprapathy (D.N.) began an intensive 12 year apprenticeship with one of the last living Maya shamans in Central America. Don Elijio Panti was already 90 years old when Arvigo began to study with him in his tiny, remote village of San Antonio in Western Belize, not far from the Guatemalan border.

She watched her mentor’s deft and wrinkled hands massage thousands of abdomens with incredibly impressive results. Maya women often arrived on the doorstep of this humble clinic in groves and gaggles to have the old bush doctor massage their abdomens for relief of painful periods, headaches, tired legs, infertility and digestive upsets.

So impressed with the technique and its deeply healing results, Arvigo spent a decade researching the how’s and why’s of this Maya Massage System. She applied her knowledge of anatomy, physiology, herbology and her naprapathic training in damaged ligaments to establish a credible explanation of causes, signs, symptoms and successful treatments for both men and women.

Her husband concentrated on working with the men. “Eventually”, she says, “I specialised in ailments of women using these time-honoured bodywork techniques that alleviate and prevent some of our very common complaints. The best part, though, is that it shows there really is an accessible alternative to surgery and drugs for abdominal and pelvis complaints.”

Don Elijio passed away in 1996 at the age of 103. Rosita also studied with many local midwives, including Miss Hortence Robinson, a 73 year old herbal midwife of Belize who had been delivering babies since she was 13. Midwives and healers of Central America agree that most female troubles are caused by the wandering womb.
“If a woman’s uterus is out of balance, so is she,” – Don Elijio Panti